Knowledge is a bit like water. We need it to survive. But just like water, knowledge is only useful if we do more than look at it. We could pour water into a cup, but if we leave it in the cup, it doesn’t do us much good. Knowledge without action is like water in the cup.

Forward-facing insurers should be careful to use the knowledge that’s in the cup. For the last several years, the insurance industry has been growing in the knowledge and practice of business and technology trends. Like any industry, insurers need to keep up with trends in order to adopt the practices that will make them competitive. Majesco assists insurers as they gather knowledge, then helps them convert their knowledge into action.

In 2016, Majesco began to study the effects of insurer business knowledge upon actual insurance business practice. We wanted to know, “If insurers understand the new opportunities, are they acting upon their knowledge?” and “if not, why not? Could there be a disconnect between levels of awareness within the business?”

In order to measure the relationship between knowledge and action, we designed a survey that would capture three phases of business understanding: knowing, planning, and doing. The results of our research have been published in two reports, the most recent of which is Strategic Priorities 2018: The Digital Insurance 2.0 Gap.

The Knowing-Doing gap for 2018 is represented in Figure 1, which links insurers’ awareness or knowing of the internal and external forces of change with the reality of how they are responding, both in terms of planning as well as doing.  Unfortunately, the Knowing –Doing Gap is still relatively the same from last year. 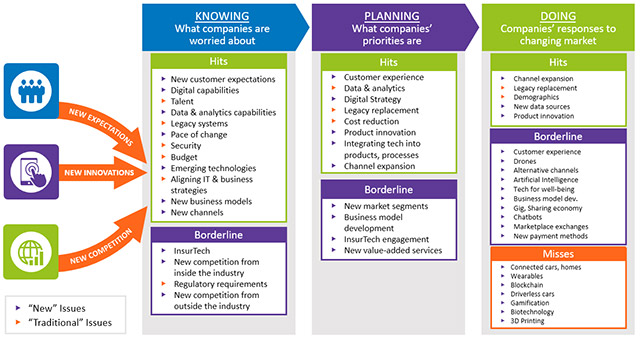 Within the categories of knowing, planning and doing, we tracked trends in terms of Hits — positive responses across insurer interest, planning or action, Misses — trends that were not considered or acted upon, and Borderline — those that had generated some interest or activity, but weren’t yet fully in the scope of insurer priority.

For example, insurers recognized new customer expectations as a “Hit,” and it maintains priority as a Hit on the Planning list, but falls to “Borderline” when it comes to the Doing list, where insurers should be acting upon the changing market.

Similar to 2017, many of the higher-ranking areas in 2018 are traditional ones like security, talent and legacy system replacement rather than those that are transformational and require new thinking and different approaches. However, encouraging signs of improvement emerged compared to 2017’s Knowing-Doing Gap, indicating some progress.

From a Planning view, the “Hits” group remained the same except for the addition of integrating technology into products, processes.  There were no “Misses” this year, with all trends moving into “Borderline,” including InsurTech engagement. A newly-tracked attribute, new value-added services entered this year in the “Borderline” group as well. While this movement is encouraging, a number of trends seem to be stuck in the planning phase, signaling that much planning may be a “considering next steps” cursory-type of planning as opposed to a “project launch” type of planning.

This stagnation is further highlighted in the Doing view. Similar to last year, only about 25% of the areas are in an active “doing” state, even with demographics and new data sources as “Hits” along with product innovation, channel expansion and legacy replacement from last year.

Customer experience and business model development remained in the Borderline group from last year, but eight former areas of the “Misses” group moved up, including drones, alternative channels, artificial intelligence, tech for well-being, Gig & Sharing economy, chatbots, marketplace exchanges, and new payment methods.  This is an encouraging sign that more companies are responding to many of the significant business and technology trends that are impacting the industry. Recognizing that companies can’t act upon every bit of knowledge at once, some of these trends should certainly demand quick action within the next year. Tech for well-being, marketplace exchanges, and new payment methods seem to be ripe for action, as well as products and services built for the Gig & Sharing economy.

While there are fewer items in the “Misses” group, some of these represent highly disruptive technologies with significant implications for insurers.

While the overall movements reflect year-on-year improvements in each of the Knowing, Planning and Doing categories as reflected in Figure 2, the Knowing – Doing Gap remains relatively unchanged.  This continuing trend indicates that the industry has increasing and considerable work to do to eliminate this gap at a time of rapid change as we move from Insurance 1.0 to Digital Insurance 2.0.

Just like “Rome wasn’t built in a day,” insurers obviously can’t go from Knowing to Doing in a day either. Education takes time. Planning takes time. Implementation takes time. But on some crucial areas of Digital Insurance 2.0 engagement, insurers can’t afford to Know, Plan and then have initiatives permanently stuck in limbo.

As a part of our Strategic Priorities research, we also cover growth strategies that insurers may consider in order to spur innovation within areas of knowledge. Would the organization push forward if they knew it meant a much greater opportunity for growth and innovation?

In our 2017 report, we observed the relationships between strategic initiatives and growth and innovation. Companies that reported higher levels of growth in the past year were also much more likely to have been developing new business models, new products, and expanding channels as compared to just replacing legacy systems. This relationship continues in 2018, where growing companies were up to two times more likely to be developing around strategic growth areas when compared to companies with lower growth.

Though these numbers are great motivators to move quickly, they are also arrows that directly point to the highest priority initiatives. If an organization is in the midst of expanding channels or adopting new business models, and new products they are on the right path for growth and innovation. Insurers that are sitting on the fence can confidently move forward. Those who are currently choosing which projects to move from planning to doing may want to pick these priorities over all others.

The shift is on. Insurers are challenged to shrink the Knowing-Doing gap and find themselves on the winning side of Digital Insurance 2.0. In my next blog, we’ll look at the Business and IT gap. Have Business and IT switched roles when it comes to strategic initiatives and digital priorities? For a preview, read Strategic Priorities 2018: The Digital Insurance 2.0 Gap, and see if your organization matches up with those we surveyed.

Get the latest Majesco blog in your inbox weekly.